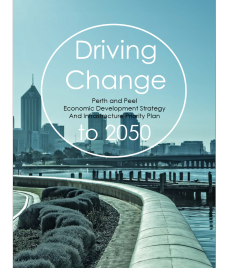 Click here for a copy of the report DRIVING CHANGE

Chairman of Regional Development Australia (RDA) Perth, Keith Ellis, said there was a risk that short-term thinking would endanger the region’s prospects of developing a considered and balanced approach to infrastructure development.

Mr Ellis made the comments on the eve of the release of a landmark Plan that consolidates the views of key stakeholders about the critical infrastructure needs of the Perth and Peel region up until 2050.

Entitled “Driving Change”, the Perth and Peel Economic Development Strategy and Infrastructure Plan is focused primarily on job creation for the region’s burgeoning population up until mid 21st century.

“The Development Plan is a document designed to drive long term consideration of the key infrastructure priorities for Perth and Peel over the next 30 years but doing so with a single-minded focus on expanded employment opportunities,” Mr Ellis said.

“The Report represents the outcomes of an extensive consultative process with stakeholders with a special emphasis on local government authorities.

“The Report is NOT intended to be an endorsement of any particular project or advocate a strict timeline; rather to represent a long term view of future requirements to drive future consideration and decision making by all levels of government.

“The Committee is anxious that the long term nature of the Report’s focus is understood to avoid short term considerations or debate about future infrastructure needs.

“It is especially important that the Report is used responsibly to drive a balanced discussion of what is needed for Perth and Peel – rather than as a weapon by individuals or groups wishing to prosecute a political viewpoint or agenda.”

Mr Ellis said there were some concerning employment trends in both the Perth and Peel regions that required a renewed focus.

“The current decline in the resources sector has impacted employment significantly and there is evidence that this decline will continue as projects move from construction to operation phase.

“While the resources sector will remain a significant driver of employment, we need to work harder at creating jobs across parts of the region where the population is expected to increase – especially the outer metropolitan areas.

Under those sub categories sit a number of specific focus projects:

Mr Ellis said a critical element of the approach being advocated by the Plan was the notion of matching infrastructure development to urban and outer urban areas where there was significant need to create employment opportunities.

“In a sense we are looking at overlaying job-creating infrastructure projects with population density in areas of particularly high youth unemployment.”

For further comments or to interview Mr Ellis please contact: